It is important to note that testing the hardness of the steel does not give a direct measurement of any performance properties. The hardness test relates to the strength of the metal, wear resistance, and other properties. The Rockwell hardness test is widely used to evaluate material because it is a simple test and relatively inexpensive.

How is the Rockwell Hardness Test Performed?

An indenter, such as a diamond, is impressed into the test sample at a set weight to measure the material’s resistance to deformation. A Rockwell hardness number is determined from the depth of the deformation in the sample. This then indicates the degree of hardness – the higher the Rockwell number, the harder the blade is. 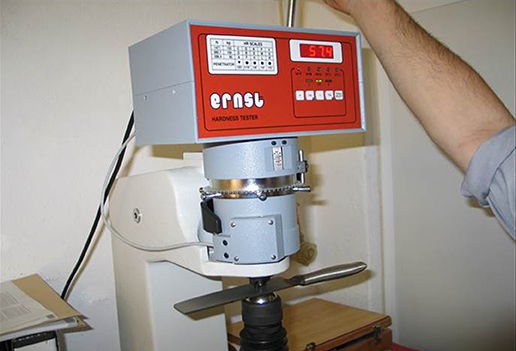 Here an indenter is being impressed into the test sample and the Rockwell hardness is 57.4.

Where does a knife get its hardness?

A knife’s hardness comes from a combination of its steel makeup and the heat-treating process used. Good heat-treating techniques will allow the manufacturer to increase the hardness of a blade with a great deal of control.

What do the results of the test mean?

A quality Chef’s knife should have a Rockwell hardness in the range of 54-58 on the scale; Any softer than 54 means the metal in the knife will have trouble sharpening and will not hold its edge for a long time. If the blade is any harder, it could mean the blade will be too brittle, more likely to chip if misused, and it will take longer to sharpen.